Flavourful ScienceBuilding an Appetite in Youth for STEAM and Innovation

How to Make a Lemon Powered Clock

*Note: Wires can be any colour, but it is more simple to distinguish them if refer to them based on colour.* 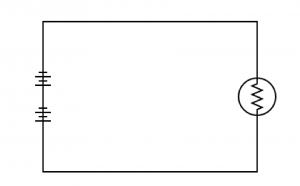 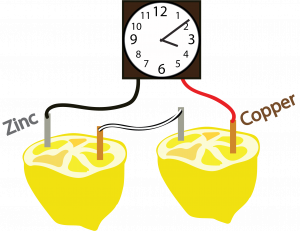 In Depth: How Does This Work?

In this lesson, we are going to power clocks using a lemon to make batteries. With these lemon batteries, you’ll be able to power anything that requires low voltage such as a light emitting diode (LED).

A battery requires an electrolyte and two different metals (known as electrodes). An electrolyte is something that conducts electricity but is not a metal. All electrolytes that areliquids have ions in them and an ion is an atom or molecule that is either negatively or positively charged. If you don’t know what an ion is, we’ll discuss that below.

found to taste sour is an electrolyte. This includes citrus fruits such as lemons and oranges, tomatoes, grapes, etc. On the other hand, bitter things are basic. Therefore, anything that tastes bitter or is basic is also an electrolyte, such as herbal tea or spinach juice.

Let’s take a look at why it is a good idea to consume electrolytes. Electrolytes help your body retain the water that you drink throughout the day, which keeps you hydrated. That is why it is important to eat chicken noodle soup when you have a cold because it is easier for you to get well when you are well hydrated. Additionally, it is important to

Today, we will focus on a group of electrolytes, acids, and more specifically, the citric acid in lemon juice. The same ions that make lemon juice an electrolyte cause it have a low pH and be acidic, which like previously mentioned has a sour taste. We can use the strong citric acid electrolyte to make a battery out of the lemon. However, now you should know that the electrolyte we use is not limited to lemon juice but there are so many options!

Now back to the electrodes – let’s focus on those. An electrode is just a metal that contains a specific element on the periodic table in them. The electrodes are what provides the electricity in a battery. Before we dive into how this happens, it is very important to understand what an atom is and what electricity is.

Each and every atom (left) is made up of particles called protons, neutrons, and electrons. Atoms have an equal number of protons and neutrons. Protons have a “positive” charge, neutrons are uncharged, and electrons have a “negative” charge. By charge, we are just talking about some force that they can exert on each other – like magnets. When dealing with these charges, always remember that opposites attract! Positively charged things go towards negatively charged things and vice-versa.  In each atom, the protons and neutrons are clumped together in the centre to form a mass of stuff called a nucleus. The electrons are thought to float around the outside of this ball of neutrons and protons. Each element has a very specific number of protons, neutrons, and electrons. The electrons can move around the nucleus and away from the atom and if the atom is missing an electron, an electron will join it! The protons and neutrons, however, are stuck together in the middle.

An ion (right) is an atom that has more than its normal amount of electrons or less than its normal amount of electrons. If an ion has too many electrons, it is negatively charged (because there are more electrons than protons) and if it doesn’t have enough electrons, it remains positively charged. Electricity in a wire is just electrons from atoms moving through the wire. When we talk about “current” flowing through a wire, we are really just talking about electrons moving through the wire in one direction.

So why do we need electrodes? Well, the atoms in one of the electrodes give up their electrons, which then travel through a wire and go to the other electrode. In the process of electrons moving from one metal to the other through the wire, the energy of these moving electrons can be used to power things such as a clock. But why does it give up its electrons? 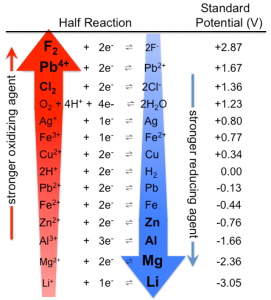 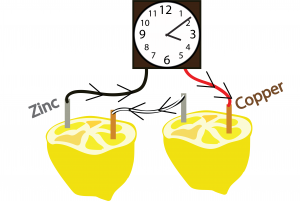 Let’s connect all of the concepts using our example of the lemon clock. We’ll be using a copper electrode (a copper nail works) and a zinc electrode (a galvanized nail works). As previously mentioned, In order for a battery to work, one of the electrodes must want to give up its electrons more than the other. The reduction potential of zinc is lower than that of copper meaning that copper wants electrons more. But if that was it, we should be able to connect the two metals and the electrons from the zinc would go to the copper. However, we still need to add the electrolyte into the equation. The electrolyte contains charged ions, which remove the electrons from the atoms in the zinc. When the electrons from the zinc atoms are removed, they themselves become ions, which move into the lemon juice electrolyte. These leftover electrons are wanted by the copper and they flow through the wire to get to the copper electrode. This creates electricity! Now lets try it out by building our own lemon clocks!